Super Drew to the Rescue

April 29 - Just a quick fly by post.  We could not make it to the house today.  What a stinker!  So, we thought the next post would have to wait until we visit on Wednesday.  Well, Drew sent us an update that made our day!


Drew sent us a picture that shows the delivery of our drywall.  Yes, they are working through the rain!  Angela replied to Drew's e-mail saying "You guys are really on top of this!  So exciting!"  Yes, it is!  Take a look:

More pictures followed of the the progress inside:


Next up: Drywall in place and the visit on Wednesday...unless Drew swoops in with another e-mail!
Posted by Bryan and Angela at 11:15 AM 6 comments:

April 27 - Our nephew, Zachary, came to visit and said that he would really like to visit the home.  We were excited to have our first visitor since Bryan's friend, Gregg, came to see the mound of dirt.  We were really excited that our viewing of the house would be at the same time as the Energy Star duct blaster testing.  So much to see!
Before we get onto the photo portion of this post, we wanted to tell you about some communication that we have had with various people involved in the process.  We were going to send our former sales representative, Mark, an e-mail telling him thank you for all of his help and that we had locked in our loan.  However, he beat us to the punch.  He sent us an e-mail saying that it should be time to lock in our loan and he was glad to see that the house was coming together.  E.T. phoned home from three states away!  Really, it was good to see that he is still keeping in touch with us after his move.

Our second e-mail came from our sales representative, Lauren.  We wanted to make sure that we were not being charged double for any of the items because of all of the addendum and re-addendums and addendum to the re-addendum's addendum.  Well, she provided us with all of the material that assured us that we were being charged the right amount.  Quick Draw McGraw with the e-mails, that Lauren.


The third e-mail was sent to our project manager, Drew.  We read on another site, Building a Ryan Homes Ravenna, that they requested extra support in the laundry room to help with vibration.   We asked Drew if that was a possibility for us.  He said that it was probably not because all of the carpenters had left the site and were moving on to another.  He said that he would try, but our drywall goes up on Monday.  We also asked him about something that we saw on another blogger's site, Our Ryan Home: A Dunkirk Dream, where they wrote Bible verses on the walls.  We asked if we would be able to write some things on the framing and Drew said that we could and it did not matter how large it would be.  He said "sign away" and sign we did (see below).

So, we did take Zachary down to the house to take a look around.  We were greeted by the Energy Star representative, Mike, who thought we were there to buy a home.  Of course, we said "This is our home!"  That was really nice to say.  Although Mike was disappointed, we moved on with a smile.  Look what we saw:

As we said before, our home was one of the models for the duct blaster testing being conducted by the Energy Star representatives.  There were signs all around our house that noted some of the selling points for an Energy Star tested and approved home.  Here they are:

So, last but not least we all took the opportunity to make the house our own.  We were really excited when Drew said that it would not be a problem to write on the framing.  So, we did and the kids really got a kick out of it!

We ended our tour with a look around the yard.  The Pisa Torre next door was in the process of framing so some of their material ended up on our side.

We made a couple of more stops along the way.  This included another visit to the park and historic downtown.  What a beautiful day!

The last photo that we have here is out of order, but it is one that makes us quite proud.  Zachary was able to snap the first photo of our family on our new porch.  It really was a great day. 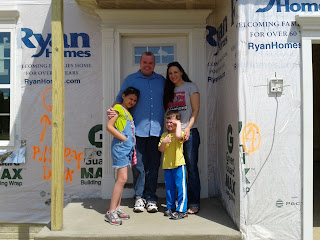 Next up: Hanging drywall.
Posted by Bryan and Angela at 10:11 PM 15 comments: