August 7 - We once read a reply comment on another blog that said "Why is it that people always post during the building process, but disappear after closing?"  Well, we knew that our posts would be reduced, but we did not think that we would go the way of Casper after we closed.

Well, we are back and we are going to give the run down on everything that has happened in our 40 days since closing.  Wrote a song about it.  Like to hear it?  Here it go.


Okay, so no song, but we will tell you all that you need to know in some brief highlights.  We hope that you enjoy the update as much as we have been enjoying the updates from our blogger friends.

June 29 - Moving day.  Well, moving day is hectic for everyone, right?  Well, we were not immune to such issues as we looked forward to moving into our dream home.  We had made our reservations of our U-Haul weeks in advance, but all of the delays caused us to keep moving it around.  By the time that our closing date was firm we found that most U-Haul franchises were booked.  Being that it was the end of the month and summer, we found that many people in our area had the same idea.  Still determined, we made our reservation and, much to our surprise, we were told that a truck would be available at 7:30 a.m. on Saturday, June 29.  This would give us time to get the truck packed and on the road before the weekend traffic really started to pick up.  Angela confirmed with the U-Haul guy that the reservation was, for certain, at 7:30 a.m.  The guy laughed and said "No problem.  It will be here.  Do not worry."  That should always be a sign, right?  So two days before our move-in day we made a call to U-Haul just to make sure as we had friends scheduled to help us load up the truck.  Angela called to find the guy say "No, we do not have any trucks available in the morning, but 5:30 p.m. there will be one."  5:30 p.m. in the D. C. area...yeah, that should work.  We suppose a 7:30 a.m. reservation with a confirmed "No problem" is pretty close to 5:30 p.m., right?

Well, we made the most of the day by getting all of the boxes and furniture to one level in our rental.  This way it would be easy for us to get it right out of the door.  We also spent time cleaning the areas that we would not be using to make it easy for us when we returned for the full clean-up.

In the midst of the move, the dishwasher was being installed in the rental home.  Well, installed may be a strong word.  The guy tried his best to get it installed, but admitted that he had never attempted it before.  Our landlord watched over him and took care of some other items in the house, but the install took from 10:30 a.m. - 5:30 p.m. (just in time for us to get to the U-Haul place).

So, we picked up the U-Haul and started loading.  This is where a HUGE shout out to our very good friends Kelly and Chris comes in.  Kelly made the trip from Alexandria (no small feat on Saturday) to help us.  Chris ditched out on a family event, at short notice, to help us too.  They were, and are, amazing.

Much to our surprise, Kelly and Chris even made the trip to our new home to help us unload.  It was completely unexpected, but we arrived and got everything into the garage.  We put the mattresses upstairs, and our son's dresser.  We even got some unexpected help from our neighbor, Jesse.  We say that all of this was unexpected because it was almost midnight when we finished!  What a day!

June 30 - July 3: We woke up on the 30th with every intention of joining the festivities at the grand opening of the model in our neighborhood.  We were looking forward to BBQ, sno-cones, and inflatable jumping castles.  Unfortunately, the party was cancelled because of weather.  Bummer!

We mostly spent this time unpacking and getting supplies for the house.  We ran into Super Drew a few times and he said hello.  He told us to let him know if we have any issues and that our lawn had yet to take root.  So, they would continue to fertilizer and water it.  Also, the summer heat was taking its toll so the sod was in shock right now.  We also went to our rental and did a final total cleaning.

July 4: Fireworks at our new home!  We bought some fireworks and lit off some smoke bombs and small fountains in our new backyard.  The kids had a blast.

Also, our son even helped Bryan mow our lawn for the first time!

July 5: Our new furniture arrives!  Our living room set and our bedroom set arrived and the guys set it up and were out very quickly.  The furniture looks great, but it was too bad that they damaged our trim and wall around the basement door and scuffed up the wall in the stairwell.

July 6-11: Continued to get everything setup the way that we wanted.  We still do not want to paint before the one year drywall repair passes, so the walls will remain white.  We wanted to get everything up and going as best as we could.  We purchased curtains for the upstairs, but waited for the downstairs.

We did have a couple of house issues.  First, the refrigerator was not making ice and the water was pouring out very slowly.  We called GE and set up an appointment for someone to look at it.  They called us back and cancelled saying that it was more than likely a filter issue and there was no need to send anyone.  Well, Bryan was not happy with that answer.  So, we called them back and told them that the intake tray was covered in ice and it had been dripping down into the fan.  They needed to send someone now.  Well, the GE repair guy arrived and said "Well, your filter does need changed, but the real problem is that the installers didn't remove the foam from in here.  It clogged everything up and then froze over when it became cold."  He removed the ice and the foam and we were on our way.

The faucet in the master bathroom had a slow drip and the kitchen sink had a leak underneath.  We called the plumbers and they came out to take a look.  They re-caulked and glued the pipes.  The repair guy said "Have you thawed any meat in this sink?"  Nope.  Well, he said that when you go from cold to hot in the sink it can make the glue wear out and break the seal.  I suppose that is words for the future, but we do not thaw meat that way.  So, if it helps you there you go.


July 12 -22: We had our first official visitors.  Angela's parents came to stay with us and were the first to give our guest room a shot.  They really liked the house, but the Virginia humidity did takes its toll on them. Also, we have yet to fully decide on ceiling fans for the rooms, so that does not help keep the air circulated upstairs.  Angela's brother also flew in, but only stayed before and after taking his parents for a tour of NYC for a few days.

Before they left, Angela's parents bought us a garage door opener as a house warming gift!  It is super quiet and that is so important because the garage is right below two of the bedrooms. 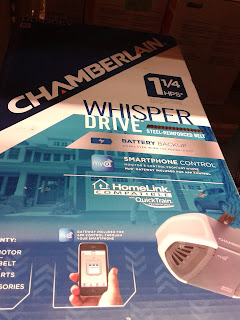 We had some great fun while Angela's parents were here.  We did so much, but it was relaxing too.  We sadly saw them off and life returned back to work and getting the house set up.

July 23 - 28: Not much to report during this time.  Life was pretty calm here on the prairie.  Although, it was time for Bryan to loose some weight and get back to being healthy.  It was getting difficult to tell the difference between him and the marshmallow man.  So, we needed to take drastic measures.  Not being the best at eating vegetables, (wait french fries are a vegetable, right?) Bryan opted to get a full dose of veggies by juicing.  We were inspired, like so many others, by the documentary Fat, Sick, and Nearly Dead and how Joe Cross was able to accomplish Bryan's dream.  Go from a fat tub of goo to a smaller, more healthy version.  Although, Joe has more hair, so there is that.  Yes, we got caught up in the craze that so many people are doing right now, but getting more fruits and veggies can't be bad for you, right?

Okay, so the juice does not always taste the best, but we are trying to keep with it as much as possible.  When Bryan feels weak or like he is going to pass out we get some actual food.  Otherwise, it is juice for now.  On a side note, it has lessened his migraines.  So, maybe there is something to be said for swilling down this awful tasting stuff.

August 1:  The 30 Day arrives.  Yes, it arrived and we only had a few things on our list.
Not much really for the thirty days.  Drew told us that it would be no problem to get all of it fixed.  He also took a quick look around and found some things that we did not find.  He sent in a worker, Jose, to repair everything.  Jose was great and repaired it all in no time.  He even fixed the dent in the frame that the delivery men made.  It looks good as new!

After our 30 days, there are still issues with the lawn, but Drew told us that they are going to re-seed and fertilize in September.  Hopefully, that will bring it back to its glory.  Our neighbors are having similar issues with their lawns.  The summer heat is brutal.

August 2-7:  Our daughter turned 11 and that was breathtaking.  She is almost a teenager!  We went to Mary Washington's house (the home of George's mother) and we had some time for pizza and The Three Stooges afterward.  All of the things the birthday girl wanted to do!

We have also had more time to get to know our neighbors a little more.  Bryan has gotten to know Jesse and our next door neighbor, Cliff much better.  They are great guys and it is a real pleasure to have neighbors like them.  BBQs and good times have been planned.

Our neighborhood keeps getting developed.  There are two more Venice homes and a couple of Pisa Torres on the way.  The Sorrento next door is almost finished as well.  They keep trucking along.  There are also many sold signs throughout the neighborhood, so it appears that we will not get much relief from the 6:00 a.m. hammering anytime soon.  Progress is good, right?

Well, that brings you up to speed.  We promise to keep you updated every so often and we will try not to go the way of Casper again.  Maybe, just a little Swayze from Ghost?